The Space Savers Project is a citywide public arts project, inspired by the Philadelphia custom of “saving” on-street parking. Saving public parking spaces, while technically illegal, is widely practiced throughout the city. Items like recycling bins, upturned garbage cans, cinder blocks and broken furniture are traditionally used as space savers. While the objects effectively “save” spaces, they can be visually crude and imply threat/ possession. We called on artists to design and create alternatives to the objects traditionally used to save spaces. This is public art project as well as an environmental and social experiment. We wanted to re-imagine what space saving in the city can look like. We wondered: Can a change in the aesthetics change the message of space saving? Or is the act of space saving immutable? Perhaps by replacing traditional space savers with art, we can transform the practice of saving spaces and begin new community dialogues.

Is saving a parking space with a work of art different than saving one with a cinder block tethered to a street sign? The Space Savers Project may reveal an answer.

The creative goals for The Space Savers Project are:

· To re-imagine a Philadelphia custom;

· To transform environments and social customs;

· To engage viewers outside of traditional gallery spaces.

The Space Savers Project is supported by Breadboard and Temple Gallery. The Project responds to the Vision Plan of the City of Philadelphia Office of Arts, Culture and the Creative Economy, which encourages more temporary public art programming in Philadelphia including projects that utilize temporary public art to illuminate or address critical civic issues and promote civic engagement and dialogue. Move Along/ Please Stay

Move Along / Please Stay serves as convoluted space saver for me, which serves to illustrate my complicated position within this power struggle for control. On the street side, mirrored plexi the length of a car camouflages the artist’s selfish gesture, reflecting back the image of a vehicle in situ as space seekers drive by. On the opposite side, facing the sidewalk, a street-kitty sanctuary is provided. It serves as a comfortable shelter for these lost creatures with nowhere else to go. The seemingly-generous gesture tap dances around the selfish act on the other side, hopefully distracting neighbors of the space saver in their midst. Although uncomfortable in this position, I have placed the burden on myself. I have created a space saver that is beyond ridiculous, which requires quite a bit of time, commitment, and labor, unlike the quick and dirty traditional space savers, which are light and transportable for the purposes of getting in and out quickly.

13th St, between Wolf and Ritner: Apart from the slow drive-bys, my space saver received some inquisitive looks and polite questions regarding just how long it was to stay (though the undercurrent being, when is it going to be moved?). The most entertaining aspect of the experience was when two elderly ladies stopped to ask if me and Piper we were kitty intake volunteers, looking to catch street kitties for shelters. At some point without my knowledge, someone moved the stuffed rat to the middle of the street, where its life was constantly being threatened by the passing vehicles. It was pretty funny. 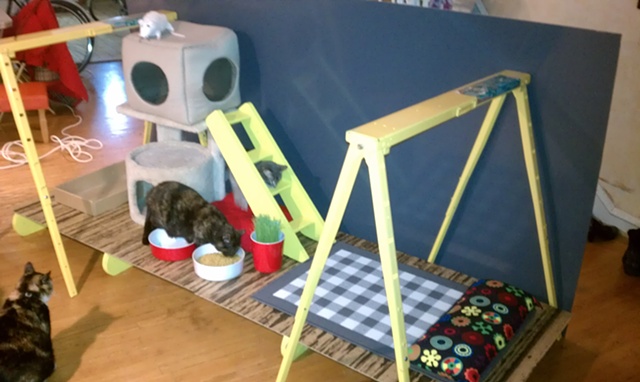